Skip to main content
Home » What's New » Dr. Luke Small Answers a Question about Floaters – on the ‘Ask a Doctor of Optometry’ Facebook Page
From   “Ask A Doctor of Optometry” CAO Facebook Page - March 10, 2015
Dr. Luke Smaill answers a question about Floaters
Sean MacDonald asks:
“Hello. My dominant eye has what appears to be "a floater" and affects my vision when I'm involved in some sporting activities. Is there any way I can remove this? Thanks.”
Hi Sean,
Great question and it's one of those things that we as optometrists get asked about nearly every day in some form or another.  I'd start by assuming that this floater isn't new and that it isn't associated with flashes of light or any changes to your peripheral vision? If any of these items are true then I would strongly recommend that you follow up with you Doctor of Optometry sooner than later to rule out any potential retinal problems that can sometimes be associated with these symptoms.  Floaters are found in the vitreous humour of the eye, a jelly-like substance that fills the biggest chamber of the eye. 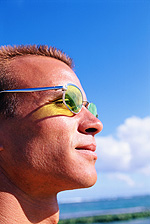 Ideally in a perfect optical system this jelly would be perfectly clear.  However this isn't often the case and sometimes it has imperfections or imagine small areas that aren't perfectly clear.  As light shines through our eye it has to pass by these condensed areas of vitreous that aren't clear and we are seeing the shadow of these areas on our retina. Since they are in the jelly that moves with our eye they tend to move as our eyes move and often appear to "float".
Typically they present as floating spots or threads or even large amoeba-like blurred areas in our vision.  I've had my fair share of patients over the years that have larger more noticeable floaters that sit in the middle of their vision on their dominant eye and drive them pretty crazy.  The location of this floater directly in the line of sight is usually the most difficult part, but a few things can change over time:  1) It may move downwards over time due to gravity moving out of your line of sight  2) It may become more translucent or more see-through over time 3) Neural-adaptation occurs and your brain gets used to it.  Very often when they first appear floaters can be particularly annoying, but I often find that when I ask a patient about them a year later they have either forgotten about it rarely see it except in certain situations.
Surgery isn't typically an option since if you were to have a vitrectomy (where a retinal surgeon removes the jelly and replaces with a clear saline) there is a much greater risk of causing a retinal tear or detachment.  These risks currently outweigh the benefits.  If you do your research you can find some eye surgeons in the United States who use a certain type of laser off-label to attempt to make floaters smaller in size.  This has never been proven to be affective or studied appropriately so I don't recommend it.  Unfortunately this is one of those things that we just have to live with, BUT it tends to always get better over time.  Important to remember that if you ever have new floaters, new flashes of light in your vision or changes to peripheral vision you should be seen by a Doctor of Optometry to rule out any potential retinal problems.
COVID-19 Update
Designer Frames
Promotions
Insurance Accepted
Our Videos
Check out these informational videos about all aspects of eye care.
Our Online Store