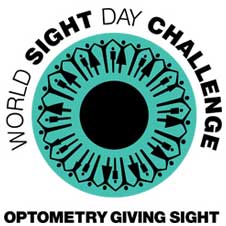 Optometrists at Armstrong & Small Eyecare Centre and their staff members have been acknowledged by Optometry Giving Sight as Silver award level fundraisers, thanks to their efforts during the 2018 World Sight Day Challenge.

Armstrong & Small raised funds during the month of October 2018 through collecting donations from patients and the practice. This money will be used to support sustainable eyecare projects in underserved communities around the world, helping people who are needlessly blind or vision impaired and in urgent need of eyecare.

“We are delighted to have received a Silver award,” said Dr. Luke Small.

“I have supported Optometry Giving Sight for many years and am proud to donate to such a worthwhile cause. The World Sight Day Challenge is a great way to help support the millions of people who don’t have access to the basic eyecare that we can take for granted.”

Optometry Giving Sight is committed to supporting programs focusing on training local eyecare professionals so that people in need will have access to sustainable eyecare from within their own community.

For example, Optometry Giving Sight helped to support the first locally trained optometry graduates at Makerere University in Kampala, Uganda. Up until now, there were only 10 practicing optometrists in all of Uganda, all trained overseas, to look after a large population of 39.5 million. Together with supporters and the new graduates, optometry development is set to bring great changes in eye health in Uganda.