Q and A with Dr. Luke Small about the Daytona Optomap Retinal Imaging Camera

1) Please describe what the Optos Daytona is used for and give a basic sense of how it works.

The Optos Daytona is a scanning retinal imaging instrument that is able to take ultra-wide images of a patient’s retina.  Typically the size of the pupil will limit any imaging system or camera from seeing many parts of the internal lining of the patient’s eye called the retina.  The Optos Daytona uses special technology to capture retinal images as if it were taking them from inside the eye. 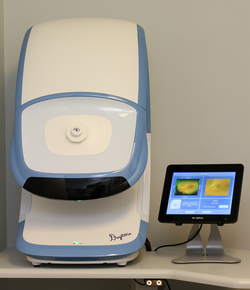 2) What components, or how much of the retina, does the Optos Daytona look at and give imaging for?

Most cameras that image the retina without pupil dilation can image about 60 degrees.  The Optos Daytona is able to show our doctors roughly 270 degrees of a patient’s retina without the use of dilating drops.  Most cameras can capture an area of the retina known as the posterior pole (that include the macula and optic nerve head), but it is only with the Daytona imaging system that we are able to see much more of the peripheral retina.

3) What types of eye diseases and disorders can be discovered?

The Optos Daytona helps our doctors to diagnose eye diseases such as glaucoma, macular degeneration and diabetic retinopathy.  We are able to monitor “freckles” in the back of the eye known as a choroidal nevus.  We’ve discovered retinal melanomas and peripheral abnormalities such as retinal holes, retinal tears and retinal detachments.  It can also sometimes help us to see vitreal floaters.  It also allows us to monitor patients on a drug called Plaquenil that is often used in rheumatoid arthritis and can cause retinotoxicity.

4) What is it about this particular technology that you find most exciting; the component that made you feel you need to invest in this for your practice?

Dr. Luke Small had worked in a practice in Santa Barbara California that was using Optomap technology in 2003.  By the 2004 he had convinced his father, Dr. Rod Small to invest in the technology.  The “wow factor” from our patients has continued for over a decade.  To be able easily image a patient’s retina and then be able to review it with them in the exam room is a great educational tool and a valuable way of comparing changes over time.

5) Can you describe the patient experience when using the Optos Daytona?

The new Daytona model is even more user friendly than it’s predecessor the P-200. It is a smaller machine and patients are more easily able to position themselves in the instrument with some light cues indicating if they are not in the correct position.  It’s quick and totally painless.

6) Do the patients that walk through your doors day in and day out, appreciate the upgrade in technology?

We continue to have referrals from our long-standing and new patients based on our ability to provide the latest technology.  Even for patients that have been imaged using this technology for many years they still are impressed at every exam.

7) How does this technology improve comprehensive eye exams compared to the days when we did not have an Optos Daytona in the optometric office?

Our ability to view more of the retina during a routine eye exam is the key component.  We are always able to look into an eye without the Optos Daytona, but the ability to get an overall view and share the results with the patient is truly amazing.

We feel that it is important to point out that this doesn’t replace a dilated fundus exam, but if our doctors do image an area that needs a better look then drops will be used to dilate the pupil and get another view with other technology.  The same goes for those patients who present with complaints that are most likely retinal in nature, we still like to use the Daytona for imaging, but we will also dilate the pupils to get an ever wider angle view.

8) To what patients do you recommend using the Optos Daytona?

This imaging system is included with all of our comprehensive eye exams other than those for children (18 years and younger).  We advise having children imaged at least every 3 years.

9) Can you share a particular story in which, by using the Optos Daytona, you were able to detect and treat a disease that would have otherwise gone undetected?

Dr. Shannon Smith had one patient in particular who presented in good health in his mid-30’s with no visual complaints.  His vision was correctable to 20/20 in each eye.  The Optos retinal scan showed that he had a retinal detachment in the periphery of one eye.

The macula was still intact and thus giving him good central vision.  There were peripheral vision defects, but he was not aware.  He was immediately referred to a local retinal specialist and was in surgery to repair the detachment the next day.  If he wouldn’t have had the Optos imaging done it is very likely that this could have gone undetected and very well could have lead to blindness in that eye.